George Chuvalo turns 70 this Wednesday, the 12th. I doubt he will ever read this, so I will make the incredibly rude statement that I can’t believe he is not dead given the fierce pounding he withstood for roughly 20 years of professional fighting, 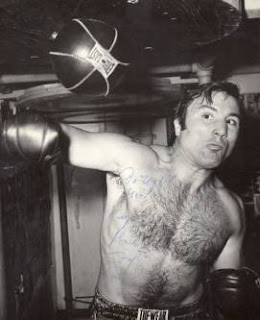 including beatings by some of the most ferocious boxers of the 60s and 70s, and personal tragedies so extreme, it is difficult to believe that anyone could withstand them and continue on.

I liked Chuvalo when he was in his prime, but mostly as a target for Ali, who, like many men of my age, I worshipped. But a few years ago, when I became aware of Chuvalo's personal struggles, I re-examined him and became more impressed.

Boxing, particularly professional boxing, is so brutal that some people think it should be banned. Actually, lots of people do, including the legendary sports announcer, Howard Cosell. We’ve all seen what happens to some fighters who fought a lot less often than Chuvalo. They end up in diapers or babbling in the corner. But years of punishment doesn’t seem to have affected Chuvalo much as he enters his eighth decade, and he took some beatings. Of course, he gave out a lot more than he took. As he himself pointed out after a loss to Ali, he went dancing afterwards with his wife – Ali went to the hospital.

A Canadian amateur champion, he started fighting professionally in 1956 at a tournament sponsored by Jack Dempsey. Two years later, at age 21, he won the vacant Canadian title for the first time. Through 1961, when he first lost to the other Canadian legend, Bob Cleroux, for the championship, he had fought 21 times, losing 4 times. Later that year, in a rematch, he beat Cleroux. Cleroux won the rubber match the next year. All three fights went the distance. Cleroux was not an ordinary fighter though. In his 25 fights up to that point, Chuvalo was one of only two to beat him (both of which he revenged). Cleroux was probably the superior fighter of the two, but he never got the big world title shot that made Chuvalo's career.

But not even Cleroux, nor anyone before him ever knocked Chuvalo down.

In 1963, Chuvalo started fighting regularly in the States, getting better all the time. In 1965, he got his big chance against former world champion, Floyd Patterson, in Madison Square Garden. Chuvalo had won 9 of his last 10 fights, his last 4 ending in 3 KOs and a TKO.

Patterson beat him in a 12 round decision that Ring Magazine named fight of the year. Like everyone else before him, he never knocked Chuvalo down.

Two years later, Chuvalo, having won his last 4 fights, all in Canada, got his shot at the WBA world title against Ernie Terrell. Terrell was made champion after Ali was stripped of his title for political reasons, and was good enough two years later to go 15 rounds in a losing effort to an Ali still in his prime. Terrell was also too much for Chuvalo, but he didn’t knock him down either.

In ’67, Chuvalo got his chance to battle Ali himself in an unofficial world championship fight. Battle is the right word. Ali needed a decision against a man he called the toughest opponent he ever had fought. Chuvalo was a bloody mess, but still standing at the bell after 15 rounds. Neither Patterson or Sonny Listen had managed to do that against The Greatest.

Losing to Ali did not seem to damper Chuvalo’s power or enthusiasm, because he won 13 of his next 15 fights, losing only to another known power puncher, Oscar Bonavena (although in a surprisingly artful fight), and then Joe Frazier. All of those wins were by KO or TKO and he was never stopped in a fight until he met Frazier, putting away almost everyone else. Still, when the fight was called in the fourth round, Chuvalo was still on his feet.

Getting destroyed by Frazier couldn’t stop him either. He won 12 of his next 14 fights, losing only to the much heavier and more talented Buster Mathis, who had been beaten only once in 29 fights (by Frazier), and then to George Foreman who was destroying everyone he came against, including Frazier. Foreman pummeled Chuvalo for three rounds. Yet, as in every other fight, Chuvalo never went down. His immediate response to the referee’s decision to call the fight was to ask him if he was nuts.

After Foreman, Chuvalo would fight 16 more times, finishing up in 1978 when he was over 40 (taking three years off in the mid-70s). He only lost twice during that time, once again to the great Ali and once to another interim heavyweight champion, Jimmy Ellis. He went the distance against both of them. Neither they, nor anyone else for that matter, could manage to knock him down. His last seven fights were wins (6 by KO, one by TKO), the last two for the Canadian heavyweight championship he had first won two decades earlier. If you look at the records of many older fighters, even great ones, they lost a number of their last fights before being forced to call it quits. Not Chuvalo. He went out a winner.

Chuvalo often fought against men far more talented than he was. With a few exceptions after the first couple of years while he was still learning, he lost mostly to world champions like Patterson, Ali, Frasier, Foreman, Terrell, Ellis and near greats like Cleroux, Mathis and Bonavena. Some of the best fighters he defeated were Jerry Quarry, then still a contender, and Light Heavy champion, Dick Tiger. But, other than his refusal to go down, it is Chuvalo's longevity that is most impressive. No other fighter was ranked in the top ten as long as he was, and that is saying something.

Chuvalo’s tragedy is personal, not professional. First one son committed a drug related suicide followed shortly afterwards by Chuvalo's wife. No fighter could take Chuvalo down, but this did. He can't remember it, but his friends told him that he stayed in bed for months. Then two of his remaining son’s died of drug overdoses. Only one son and his only daughter have survived. The story of Chuvalo’s family has been documented on television several times, one a few years ago, which drew my attention to him for the first time in many years.

Surviving the depression, and remarried, he now has an anti-drug organization (http://www.fightagainstdrugs.ca/). Chuvalo’s toughness, even when losing, inspired a documentary (The Last Round: Chuvalo v. Ali). Contrary to some rumors, he did not inspire Sylvester Stallone to write Rocky.

While far from the best fighter of his generation, and not even one of the truly greats, Chuvalo was certainly up there with the toughest of them, both in and out of the ring, and continues to be inspirational to this day.

Happy birthday, George. Personally, I wouldn't get in a ring with you even now.
Posted by David at 7:24 AM