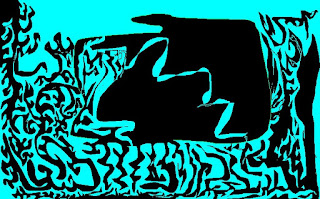 Probably few people know that I am a world renowned artist. I keep it a secret to avoid having to hire bodyguards. And, you know, modesty.  Actually, I have little to no artistic skill, just as I cannot seem to learn a musical instrument (failed  at least 3 times, and that isn’t including grade school). With a lot of practice in law school, and desperation born out of boredom, I learned to draw Garfield the Cat with some proficiency.  When I would go to the school on weekends, I’d visit the blackboard where they would post jobs and erase the out of date posts so that I could draw Garfield cartoons and say what I hoped were funny things about law school. The only one I remember was Garfield sitting in front of a fire burning his law books and saying (the usual balloon over his head) “I knew I’d find a purpose for these things” or something like that. For about a year the artist was a mystery, which mystified me as so many people were aware of my obsessive Garfield cartooning in lieu of taking notes. I felt like Superman must have when he put on glasses and instantly acquired a secret identity. One day, someone pointed out that I draw Garfield a lot. So, reasoning mightily, it must be me.  D’uh. And they were all going to be lawyers.

The picture above is probably the best design I ever made. I’m not capable of drawing anything realistically - that is, as it appears to our eye. I took a class once and have tried practicing a few time, likely a lot more than most adults, but, I just suck at it, to state it as accurately as possible. So, I’m stuck with abstract doodling like the above. That one I had always thought I called Creation Myth which was the impression I was going for. Then I thought it was better as Spirits of the Underworld or Odysseus in the Underworld, something like that.  I can re-name them as much as I want. After all, Michaelangelo’s David was first called Il Gigante when it was mostly just a big block of stone, although King David was always the intended project. And there is a connection between Michaelangelo and me. When I was taking the art class I mentioned above I once heard him spinning in his grave. Might have been my imagination.

As a total side note, David is the greatest piece of art I ever saw, of course, in my humble opinion. Photographs do not do it justice. The copy in the Piazza della Signoria does not do it justice either. You have to go to the Galleria dell’Accademia to see it. From what I saw and others have reported to me, even people who don’t like or know much about art go away with a feeling of awe.  I assure you, this is not only my opinion.  As Jodie Foster’s character said in Contact when she was given a view of the cosmos only available to us in animation – “No words. No words. They should have sent a poet.”  It is possibly the first time in my life I felt I came in close contact with what I would call genius.  It is probably not that well known that the sculpture was started by another artist before Michaelangelo was even born and even another sculpture took a whack at it after that.

Back to my portfolio, when preparing this post I looked for it on my computer and realized that that I simply and prosaically named my black and blue work - “Black and Blue,” and so it shall remain for eternity. So much for creative titles.


The picture below shows off my lack of any talent more clearly. I called it “Falling star over tropical island.” It may seem pointless to name them, but you have to give the computer file a name, so why not?  I do like the picture, but Michaelangelo is preparing to spin again. I know it would be smarter to tell people that this was an impression, but that would be living a lie. That yellow splotch on the perfectly round island (like in real life, right?) is supposed to be a beach, if you are confused. 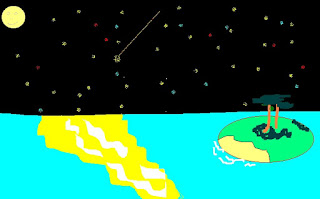 The next two are companion pieces, both entitled “Me roasting in hell.” For some reason I found that funny, although I imagine it would hurt quite a bit in real life. It's the same picture in different colors.  Of course, not that I believe in hell, but if there is one, I doubt that there is anything to do about it now as I've been an atheist for most of my life. The really important thing is that before go we should have something cool to say as our last words, hopefully not something like “Ohhhh, sh. . . .” (which is what my dad told me he was thinking when he fell off a ladder once) or “Does that sound like a plane in a dive? “

“Too infinity and beyond” is already taken,” which is a shame, because that would have been a very memorable note to leave on. I have always been partial to a line from a dying associate of the hero in Indiana Jones and the Temple of Doom – "I've followed you on many adventures...but into the great unknown mystery, I go first, Indy!” But, who would I say that to? 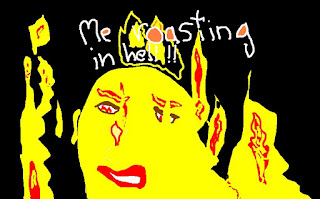 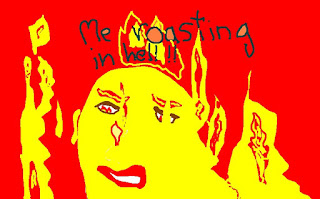 I do have my own catch phrase, which I try not to say anymore, but  it still slips out of my mouth all the time. “See you folks in church,” or “see you in church.” I didn’t make it up. I saw it said by Rebecca of Sunnybrook Farm's (Shirley Temple) evil uncle as a sarcastic exit line (just before he stepped on a loose board on the porch and got whacked in the face). I just liked it. Maybe I started off saying it deliberately – that was probably 25 years ago when my daughter was little and loved Shirley Temple movies, and I just can’t remember anymore. But, very quickly, it became a reflex when I'd say good-bye. After a few years, people started saying it to me. Anyway, it would be really cool if just before I made the big leap I could have the strength to say “See you folks in church.” But, then I’d really better die, because I would just look pretty stupid if I didn’t. Yes, I digressed again.

If I remember correctly, the inspiration for me in hell came from my daughter's friend, who I was driving back from a Christian summer camp at which they had spent a week or two. She blithely remarked that if you did not accept Jesus as your personal savior, you have to burn in hell for eternity. Now, I really didn't care what she thought and for all I know she is an atheist now as an adult, but at the time I asked her if that wasn't a little peevish of God. After all, probably a few seconds of roasting in hell and I'd be a believer and apologizing all over the place - why was eternity necessary? She explained, in the most traditional religious fashion, that this was just the way it was and she was sorry.

Christmas in Iceland is the name of the exuberant light show below. I think the squiggly reddish lines are supposed to be Christmas trees. I don't even know if that type of tree grows in Iceland. If they do, I imagine they are green like other such trees, but, it’s art, so I did what I wanted, just like Bob Ross told me I could. And, to be frank, I'm not sure why it has to be Iceland. There's really nothing in the picture to indicate that. 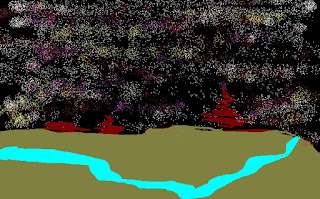 Speaking of Bob Ross, I did take a shot at oil painting with his paint kit about a quarter century ago. I enjoyed his show, but I couldn’t keep up with his speed and just winged it. I literally didn’t understand how to get the paint on a brush when I first tried. I can actually date this experiment to 1990, because I remember the woman I was dating. She painted, and I called her to ask her how to go about it. She was a little surprised but told me. In retrospect, it might seem impossible that I did not know how to do this –  even as I write this I'm thinking how could I not know that? I guess I kind of did, but I was sure the paint would just fall off and needed reassurance.  When I was done painting I tried to clean the brushes for what seemed like forever. After a while I called her back and she told me, no, you don’t have to get every last drop of paint off the brush. Thank God. I was exhausted.

I still have the Bob Ross paintings I did somewhere (I think), but I looked in the attic and couldn’t find them. You will not be surprised that they were not very good. The first one was of a mountain range at a distance. All the mountains looked pretty much exactly the same – again, just like in real life, right? The last of the four paintings I remember doing was a river running through the woods in autumn. As they were real pictures, and not computer files, I never named them, but River running through the woods in autumn would likely be the name of that one. When I showed it to the office one day, every one said some version of “Oh, a road, running through the woods.” Now, a smarter man would have said, “Yes, yes, that’s exactly what it is.” But, I insisted that it was a river, not a road – “See, look at the rocks underneath the transparent water. See. See.” They saw what they saw, and wisely, I lay down my brush for the last time. I don't need to be hit in the face with a loose board to see the light.

And so I remain undiscovered by the art world, perhaps like Rembrandt and Van Gogh, to be discovered later on, when future generations are discovering Bill and Ted’s revolutionary music too.

Email ThisBlogThis!Share to TwitterShare to FacebookShare to Pinterest
Labels: art