Chances are you never asked yourself who is the greatest runner of all time. When I was young, I was fascinated by a Finnish runner named Paavo Nurmi, and he gets my vote. Of course, they have only had the modern Olympics since 1896 and kept world records from somewhere around then, so “all time” really means a little more than a hundred years.

He was not only an incredible athlete, but he was also a unique individual, which is probably what interested me when I learned about him as a kid.

By the time I was born in 1959, Nurmi was long retired and pretty much forgotten. I have never heard him mentioned by another person land only earned about him from sport books.

He was born in 1897 and died in 1973. He was inspired by the first Finnish star athlete, Hannes Kolehmainen, who competed in the 1912 Olympics soon after the country came into being, but who kept at it for a long time, even winning the 1924 Olympic marathon.

Nurmi’s heyday was the 1920s. He competed in three Olympic games, not a record, but still rare and impressive. In the three games, he ran in twelve events. In three of them he came in second. But the other nine, he won. No one else comes close in track to that record until very recently, nor could they match the diversity of distances he ran. In fact, the only athletes in all sports who have more gold and silver medals than Nurmi in the Olympics are two gymnasts, participating in a sport where there are more medal opportunities.

In the 1920 Olympics Nurmi ran four races, coming in second in the first one, the 5,000 meters (about three miles), pretty much surrendering at the end and jogging it in, thereby losing his first and last Olympic race to a non-Finnish. He easily won the next three events he was in, including the 10,000 meters and two cross-country races (one a team race). In the 10,000 meters, he avenged his defeat in the 5,000 meters, by handily beating the Frenchman, Joseph Guillemot, who had earlier bested him.

In 1923, a non-Olympic year, he became the world record holder in the mile, the 5000 meters and the 10,000 meters (about 6 miles). No one has ever done that again, the mile, a middle distance event, not even being a race that most long distance runners like Nurmi ever compete in or can do so with success.

In 1924 he won 5 gold medals at the Olympics. No track or field athlete has ever matched that in an Olympic year, and very few in more than one. Two of the events, the metric mile (1500 meters) and the 5000, had finals less than two hours apart, some report much less. The 5 gold medals that year made 8 in a row.

Strikingly, he likely would have won 6 that year if given the chance. Although he was the reigning champion in the 10,000 meters, his own country’s officials either wouldn’t let him run because they feared that he would be overcome by the fierce heat that had decimated the other cross-country runners (which Nurmi won) landing many of them in the hospital or because they wanted to give another runner a chance. Furious, Nurmi ran his own shadow 10,000 meters, using his own stop watch and beating the winner’s time. Shortly thereafter, he set the world record in that distance, which lasted many years.

In his last Olympics, the 1928 games, when he had already slowly began to decline he again won the 10,000 meters and 2 silver medals in the 5000 meters and the 3000 meter steeplechase, a race which requires the runner to complete a slightly less than two mile course while jumping over huge hurdles.

His Olympic career was unfortunately cut short by a scandal in 1932. He was accused of receiving more than due expenses in a track meet and thereby becoming a professional, which, at that time, barred competition in the Olympics. Nevertheless, he showed up at the games intending to run and win the marathon, hoping to finish up as his hero, Kolehmainen had at the last Olympic games. The other Olympic competitors begged the officials to let him compete. He was not allowed.

Over the course of his career he set over 20 official world records, many which lasted for years. It is possible, given that many events he set records in are no longer run, and some were unofficial, that he actually set over 50 (the largest number I have read claimed for him includes 29 unofficial indoor records set in America in 1925). Counts differ, and given that they occurred a long time ago, it is difficult to be sure. But the number is so high at a minimum, it doesn’t matter at all.

Nurmi was very popular in America having won nearly every one of 55 scheduled races he competed in here in 1925, dropping out of one of them and losing only in the half mile, which is closer to a sprint, and not an event he would typically run in.

Today marathons in Finland and America (Wisconsin) are named for the “Flying Finn” who curiously ran with a stopwatch in his hand, having little competition from other runners. He also has an asteroid named for him, as well as streets in Finland. Finland has also put his picture on a bank note. 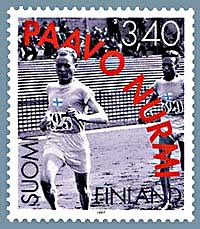 The secret to Nurmi’s success was, in his word, devotion. He developed a systematic cross-training including calisthenics, walking and running. Where others ran slow at first and then sprinted hard, he would set a fast but workable pace for the whole race, aided by the stop watch he routinely carried, sometimes sprinting if he needed to at the very end. He rarely did. Although this sounds pretty simple and common sense, no one really did it before him.

Reportedly, he trained on black bread and dried fish. Almost a robotic running machine, he showed little interest in other runners or the media, which is probably a good part of the reason you haven’t heard of him.

Just to compare him with another runner who probably would deserve to stand in the same track with Nurmi, standing out as a heroic figure among the many great runners who have competed in the last century or so, Jesse Owens.

Owens was also a magnificent athlete. On one afternoon in 1935 he set four world records, in about an hour, including the 100 yard dash (tying the record), the 220 yard dash, the long jump and the 220 yard hurdles.

In the glaring spotlight of being a black athlete competing at the 1936 Olympics in Nazi Germany under the glare of Hitler Owens won 4 gold medals, the next highest total for a track and field athlete after Nurmi in one Olympics until Carl Lewis did it.

Owens Olympic medals and records were all within 120 yards distance of the others, from 100 yards to 220 yards (including the 220 yard hurdles) as well as the long jump. Nurmi won Olympic medals and set world records ranging from a metric mile to metric 12 miles (20,000 meters), an astonishing range. Nor was his metric mile record a fluke. It stood eight years. He held the 5000 meter record for ten years, breaking it once himself while he held it.

Or compare Nurmi with an incredible Moroccan runner, about whom an article on the internet states as follows: “Considered by many track and field experts to be the most versatile runner who has ever lived, the Moroccan Said Aouita holds the current world record in five running events: the 1,500, 2,000, 3,000, and 5,000 meters and the two miles. He is also a two-time Olympic medalist who captured the gold in the 5,000 meters at the 1984 Games in Los Angeles and the bronze in the 800 meters at the 1988 Games in Seoul.”

No disrespect to Said Aouita, whom I have rooted for heavily, but his sensational records and versatility pales in comparison to Nurmi, whose records spanned from 1,500 meters to 20,000 meters.

Carl Lewis should get more than a mention here too, as in four Olympic games, he tied Nurmi with 9 Gold medals, but only 1 silver, whereas Nurmi had two more than him, and did it in only three Olympics. Like Owens, Lewis’ medals were all at sprints and the long jump.

A long distance runner from Australia named Ron Clarke set an incredible 17 world records, probably only overshadowed by Nurmi, but never won in the Olympic games.

None of the above is to disparage Jesse Owens, Carl Lewis Said Aouita or Ron Clarke, some of the greatest athletes of all time. But we even remember Owens, who ran in the 1930s, and we don’t remember Nurmi very much (outside of Finland, of course).